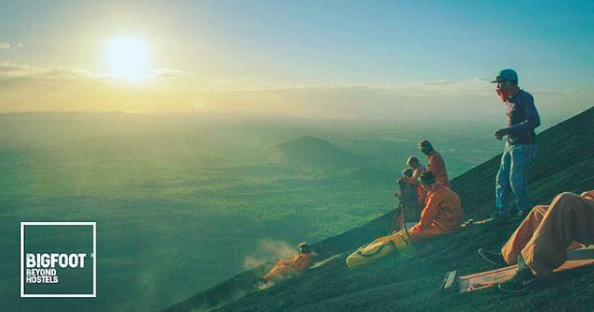 Enjoy the youngest volcano in Nicaragua. It is one of the most active volcano and unique in all world for the practice of Volcano boarding.

... they created a sit-down toboggan made of metal and Formica-reinforced plywood.

The adventure sport was born!

​Volcano boarding was the world's first. León became the only place in the world you could slide down the side of an active volcano.

Bigfoot Volcano Boarding has sent down over 20.000 people to slid down Cerro Negro slope at up to 95km/hr!

PRICE $31 PER PERSON, price includes transportation from Leon to Cerro Negro, full volcano boarding gear and water. Tours leave from BigFoot Hostel at 9 am, private tours can also be arranged upon request on a different time schedule.

You can also go by public ride we have busses going from Miramar to Leon from Monday-Saturday. 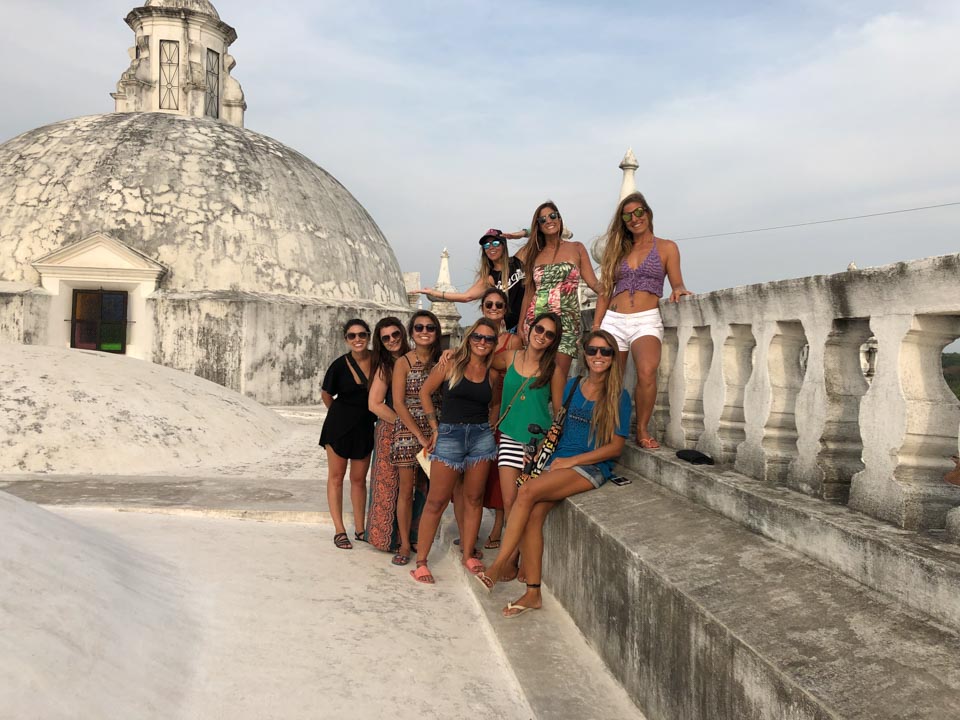 Explore the colonial city of Leon. The city contains one of the largest cathedrals in Central America and possesses a rich history. Leon is a university town with exciting nightlife, a modern atmosphere, and excellent shopping! A popular choice on weekends and holidays for those looking to experience a bit of the Latin culture of the area. A shuttle for groups can be arranged to take those in search of some nightlife to nearby Leon. Tasty Mojitos, sultry Salsa beats, and spicy dance moves create a unique atmosphere miles away from the relaxed beach feel of Miramar. 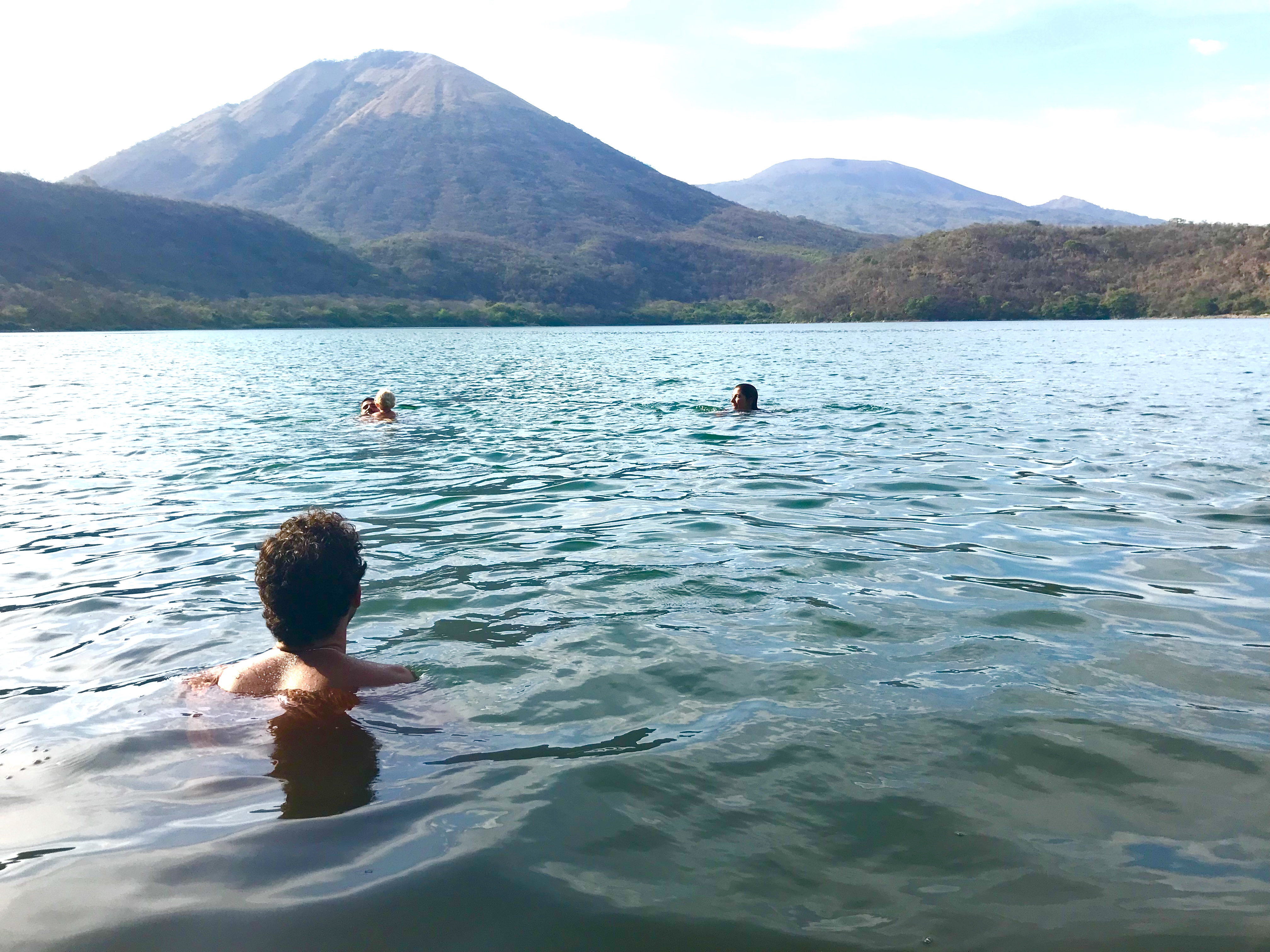 Locate only 30 min away driving for the hotel You will have to look long for a more idyllic place than this old volcano crater filled up with water, surrounded by volcanoes and beautiful nature.

The lagoon has fresh water where you can take a swim in this peaceful environment.The hike takes around 20 minutes, then you have the option of swimming in the cool, freshwater lagoon. It is situed in the bottom of the volcano Momotombo.

Super uncrowded with intense jungle. It's in the middle of nowhere with no one around. Will be you and friend enjoying a paradisiac lagoon.

The scenery is amazing! 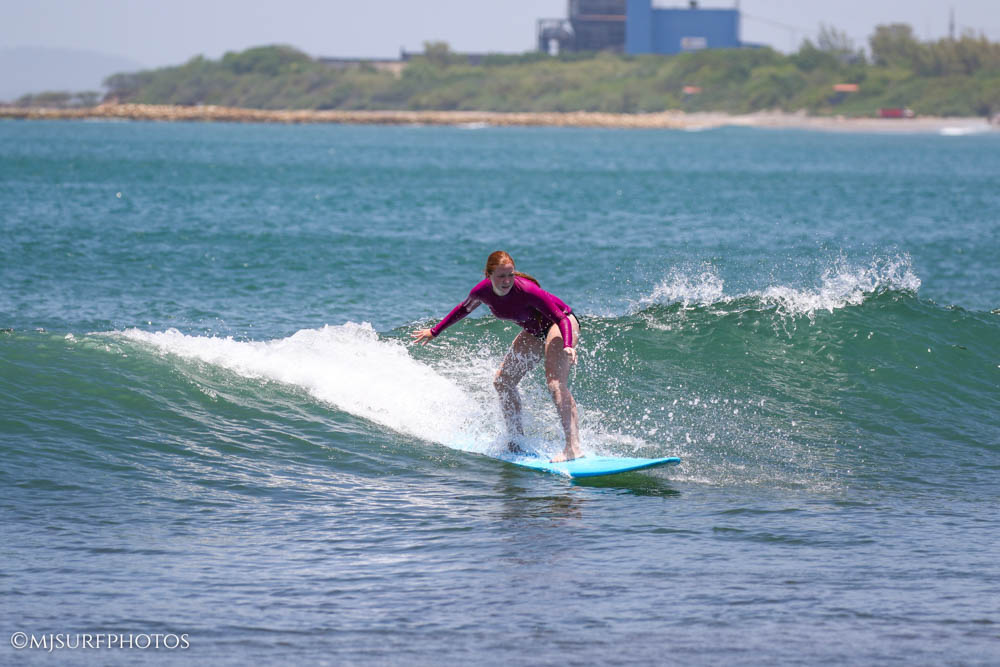 New to surfing? Always dreamed of being a beach bum, catching waves and relaxing on the beach in between sessions?

Check out our beginner surf packages, designed to put you at ease in the water and catching waves comfortably in no time!

From November to March, the changing swell direction and end of big wave season makes Miramar the perfect location for those new to the sport. The all-day offshore winds, consistent swell and physical geography of area creates the optimal conditions for quick progression. Newbies will find the variety of waves out front and flexibility to surf for as many hours as they can handle a welcome change from other spots that experience onshore winds after the morning. Nicaragua is famous for its conditions, where surfers from all over the world come to enjoy a relaxed, encouraging atmosphere that is perfect for beginner or intermediate surfers.

We recommend that beginners who really want to learn book a stay of at least 5 days, with 7-10 days being optimal. We have a program designed for new surfers that encompasses functional training, classroom seminars and of course, lots of in-water instruction to sure you make the most out of your time at Miramar! 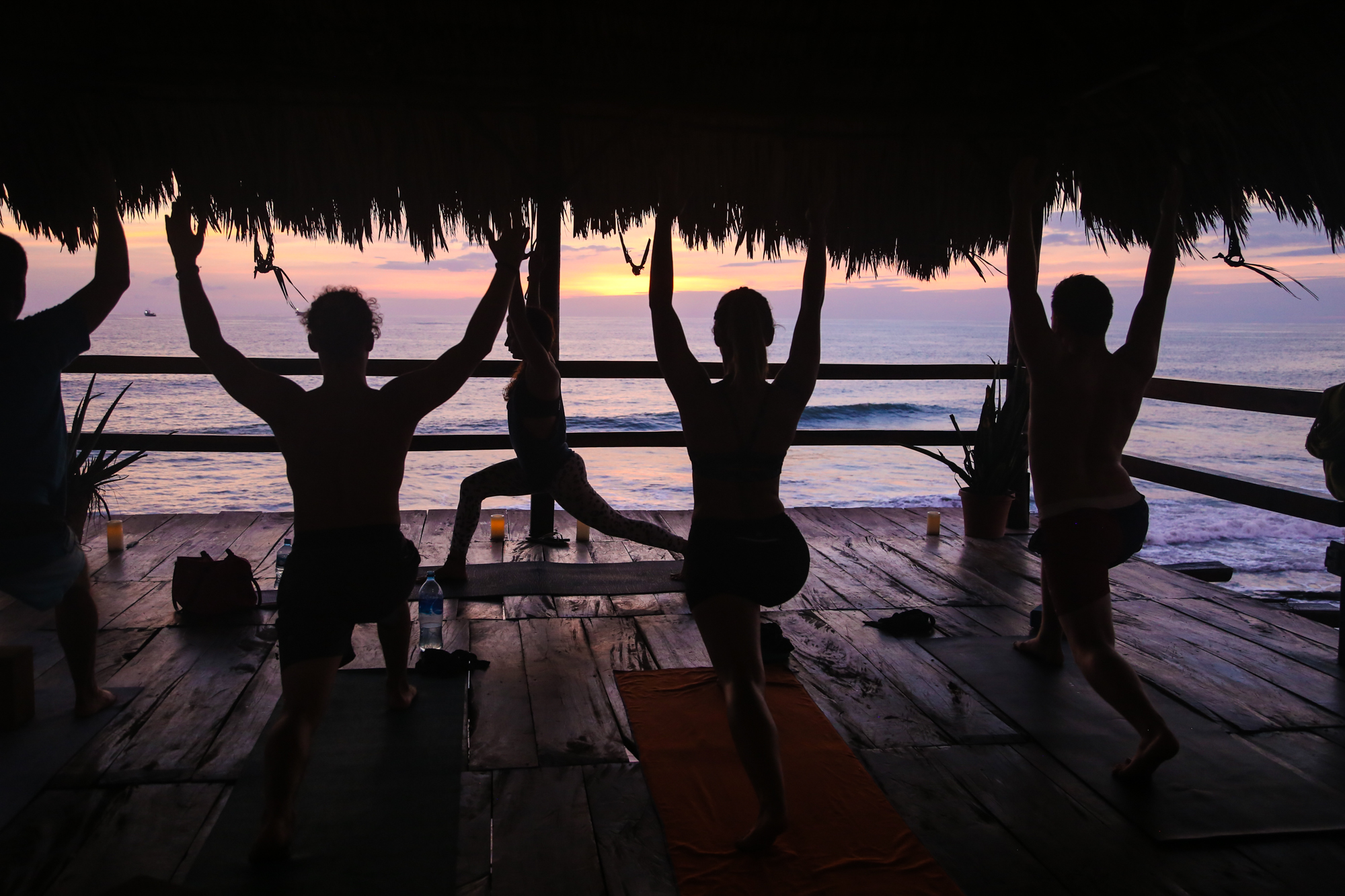 When we have a teacher available during seasons it is include and you wont be paying any extra for this service. We partner up with yoga teachers all year long and we offer and intern partnership get to know more about our yoga teacher annual schedule at miramarsurfcamp@gmail.com

With its calm waters, quiet beach and breathtaking sunsets, the area serves as a perfect sanctuary for deeply transformative, introspective retreats.

Away from the busyness of modern life, the tranquility of the property and immense natural beauty that surrounds it creates a space conducive to healing and positive personal development.

If you are interested in joining our yoga volunteer program please send us an email miramarsurfcamp@gmail.com 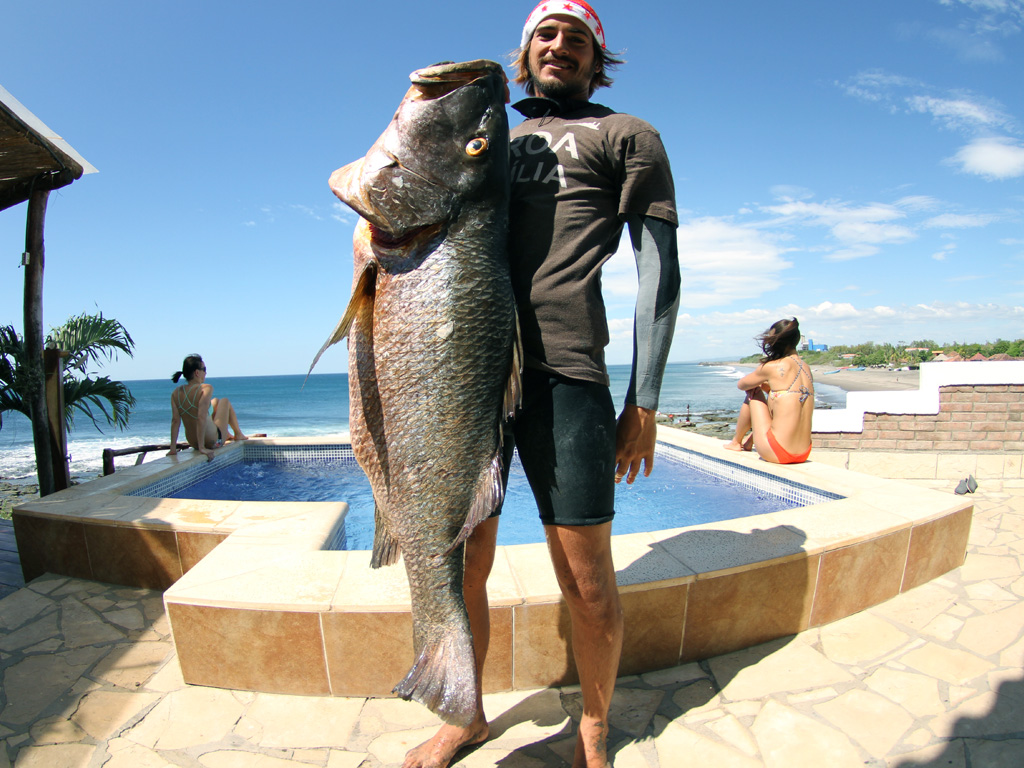 A first in the area- Miramar is excellent place for spearfishing tours.The area is graced with several tucked away spots full of fish and is easily accessible by boat but only if you have little bit of experience.

Miramar Surf Camp can take you by boat to the best spot of the day, determined by the tides, visibility and information provided by our GPS fish finder.

Do not bring your own equipments as it is against Nicaraguan Law. 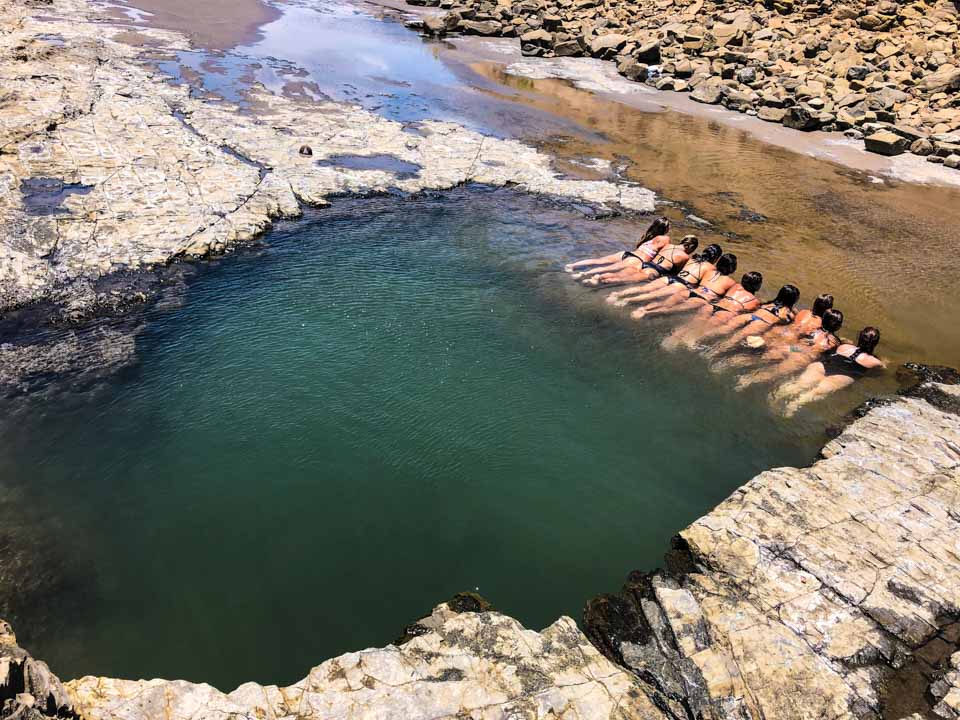 Take a 45min boat ride along with Nicaraguan central cost, you will be navigating through several beaches (Punta las Flores, El Veleiro, Playa Hermosa, Santa Rosa & El Transito) enjoying this pristine scenario. At El Transito you can score super nice waves on mid-small swells and with the low tide you can enjoy the beautiful natural tide pools. At the beach, you can also have a drink since this beach offers some nice spots to hang out and have a good time. El Transito can be also accessed by car or Tuk Tuk only 30 minutes away from Miramar Surf Camp.

Plan your trip, by yourself or with friends, and catch the dinner!

A bad day fishing is better than a good day at the office.

We offer individuals, groups or couples tours. Enjoy a peaceful ride down our uncrowded beaches or alongside the river. It is truly stunning at sunset.

The Telíca Volcano is an active volcano about 30 kilometers from León. The latest violent eruption was in 1948, but the volcano has ever since been smoking and grumbling. The volcano is just over a kilometer high (1,061 meters) and has a huge crater: 120 meters deep and 700 meters in diameter.

The actual climb is not that hard. In one-two hours you can be at the crater. It is never really steep, and there grow lots of trees and plants on the volcano. There are several spots from where you have a great view. Before you reach the crater, you will have to cross a beautiful valley with grassland, trees, and rocks. Just seeing the crater’s walls rising from the valley is impressing.

Sometimes you also can see lava. Nice for sunset tours.

What is left of the second oldest city of Nicaragua is nothing but ruins. León was established in 1524, and was one of the most important cities of the region. Gold from Nicaragua and other countries was traded in León, and there were quite some rich merchants living here.

The city was built close to Lake Managua (Xolotlán) and the Momotombo volcano. When the Momotombo erupted in 1610 the inhabitants rapidly left the city in fear of the volcano. A new León was built some 30 kilometers to the west, where it still is today. The old León, or León Viejo as it is locally called, was never actually destroyed by the volcano and preserved beneath the surface. The real excavations began in 1999.

What you can see at León Viejo are the foundations of the houses, as well as some partially restored important buildings, like the church. The Spanish conqueror who established the city, Francisco Hernández de Córdoba, was murdered by Pedrarias Davila here as well, and his beheaded body has been found next to the body of his murderer. You can see the cellar where they were found, as well as a statue of Hernandez de Cordoba holding his remains and other bodies found, beneath the statue.

The ruins of León Viejo have been listed as UNESCO world heritage site in 2000. The park is well set up and you will get a guide who will show you around. There are many signboards that tell something about the history of the city. You can also walk up a hill from where you have a great view of the lake, the Momotombo volcano, and the other volcanoes surrounding the city.

During the dry season, there can be abundant wasps in León Viejo. Bring some repellent or – probably more effective – wear a long sleeve sweater and pants.

Very Tuesday and Saturday there is a beach party in nearby beach Las Penitas, run by the popular, notorious party hostel, Bigfoot. Expect a lot of the drinking, loud music, dancing and beachfront rowdiness that gives Bigfoot its notable reputation.

The San Cristóbal is the highest active volcano in Nicaragua. This high, cone-shaped, smoking mountain exhibits all characteristics of a 'traditional' volcano. There are several volcanoes located around the San Cristóbal.

Ascending the San Cristóbal is one of the most difficult climbs in Nicaragua. The steep slopes make it hard to reach the huge crater. It takes a whole day to ascend and descend the volcano, and you should be in very good condition. This climb is certainly a challenge, but the views of the area and the experience of reaching the crater are surely rewarding.

The Telíca Volcano is an active volcano about 30 kilometers from León. The latest violent eruption was in 1948, but the volcano has ever since been smoking and grumbling. The volcano is just over a kilometer high (1,061 meters) and has a huge crater: 120 meters deep and 700 meters in diameter.

The actual climb is not that hard. In one-two hours you can be at the crater. It is never really steep, and there grow lots of trees and plants on the volcano. There are several spots from where you have a great view. Before you reach the crater, you will have to cross a beautiful valley with grassland, trees, and rocks. Just seeing the crater’s walls rising from the valley is impressing.

Sometimes you also can see lava. Nice for sunset tours.

San Jacinto is a little town about 20 kilometers northeast of León. Behind the village lie boiling mud holes, connected probably to the Telica volcano. The field is not big but it is interesting as well as extremely hot to walk around and see the holes, which differ in size and color, where the mud is fiercely boiling. The mud sometimes throws little rocks in the air and steam is continuously emitted from the holes.

Get in the best rum's factory for a tour. See how everything is prepared and enjoy shots of all kind of rum.

Flor de cana is the most awarded rum in the world, made here in Niacaragua.

The Juan Venado Island, or Isla Juan Venado as it is called in Spanish, is located just off the coast in front of the town Las Peñitas. The island south end is in front of Salinas Grandes town and beach. The island lies very close to the coast, and is practically nothing more than a thin, long trip of sand. The nature, however, is spectacular.

Between the island and the coast grows a mangrove forest, which houses tons of birds. Furthermore, crocodiles live in the water as well as lots of crabs and other crustaceans. It’s great to take a boat or kayak and cruise through the forest. There are small, curvy waterways you can browse through, with egrets and other birds around every corner.

The Somoto Canyon, one of oldest rock formations in Central America, has become one of the main attractions of Northern Nicaragua due to its recently "discovered" tourist potential. It is an impressive site with a unique scenario. Between its walls, visitors can undertake various activities.

The canyon offers a unique environment in the country. When entering the place by the Solis Valley, which is frequently used, one can observe the panoramas of dry forest with small trees, as well as flora and fauna. Deers, parakeets, rabbits and iguanas are some of the species that inhabit the area.

As you get closer to the riverbeds of the Coco River, the path becomes sandy and one can see the streams that usually limit the access to low clearance vehicles. The topography starts changing until a single, huge wall that announces the beginning of the canyon. Between the small holes of the rock one can see orchids, bromeliads and cactus.